I created this post long ago and forgot about it until I was going through Analytics for this site and noticed a lot of hits to this post. It’s old and now outdated, so since people are searching for “closed captions sony vegas”, I figured I should update…

The current version of Sony Vegas Pro is 13. That is about to change soon as MAGIX has purchased Vegas from Sony Creative Software. I HOPE MAGIX will retain much of the features of why I love to use Vegas AND I hope they fix a lot of the old problems that it has vs its counterparts…

By default, you will need to create your CC markers by pressing “C” and insert the caption. (Check the help file within Vegas.) Now, that takes too long, so I bought a plugin from VASST called Caption Assistant and let me tell you it has paid for itself time and time again with time saved! You can purchase it for about or less than the cost to pay someone to close caption a 30 minute episode. Using Caption Assistant, you can import a txt file of a transcription and then press the icon to insert when you hear the next line to be inserted. Its fast! Easy to do real time, but you can also increase the play rate and actually do your closed captioning 125% and even 150% of original speed (depending on the speech and ease of hearing.)

My original complaint about closed captioning and Sony Vegas was that it wouldn’t embed the captions into a .mpg. Most networks I deal with just want a simple 1920x1080i .mpg. Vegas 10 didn’t do that. Vegas 13 Pro does! It embeds it as TEXT streams. Check out this shot from a media info scan on a recent TV commercial I made (By the way, media info is an EXCELLENT tool to view ANY information about almost any media file!)

Notice there are actually two text streams. One is EIA-608 and the other is EIA-708. BOTH are needed for broadcast.

Also note that the stream size is 0.00 bytes and is muxed in Video #1 stream. This is fine… for broadcast.

Now there is a slight issue. I can’t seem to get the captions to display when using a standard player whether it be Windows Media Player, QuickTime or even VLC with captions checked. I did manage to get them to display with Media Player Classic and some filters applied somehow but after a system restore, I couldn’t get it do show them again.

To actually see the captions, you can use Elecard Group’s MPEG Player or just delete or rename the .scc file of the video you encoded and import onto a new Vegas timeline and if you have scanning for closed captions enabled, then you will see your markers from the exported clip.

I don’t worry about previewing closed captions anymore like I used to be when I first started captioning. I don’t preview because I know they are now in the file.

Closed Captions in MPG, M2T, and MXF works, but not all formats.

As I mentioned earlier, almost all stations I deal with want .mpg. I’ve sent to some networks that want .mxf. Fox Sports South is one in particular that wants .mxf (HDCAM 422, OP-1a) and is VERY specific on many parameters! The captions would embed fine in .mxf however, Vegas Pro 13 would NOT export as drop-frame timecode format… That’s a whole other issue, and is a bug and Sony actually told me that they didn’t have a need to fix it because not enough people reported the problem! Probably because they were planning on selling it off to MAGIX? MAGIX, FIX THIS PLEASE!

Anyways, I haven’t tested many other formats, but play with it and use MediaInfo to see if the text streams are in it. I do know that they won’t show up in .mp4 or .mov.

My encode recipe / settings from Sony Vegas to .mpg for broadcast.

While I’m updating this post about closed captions, it goes hand in hand with delivering to the TV stations. So if you need a good render/encode preset for .mpg, here are my settings. I haven’t had a station yet tell me there’s any problems or that the file is unacceptable. 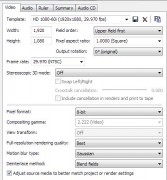 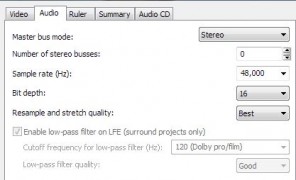 Note, I use 45Mbps, you can adjust this to whatever your station’s max rate is in the video tab. 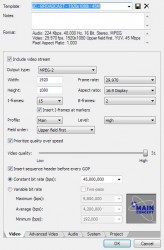 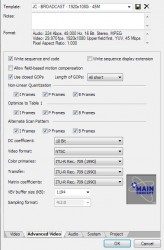 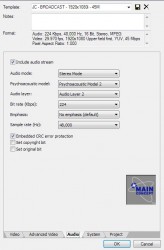 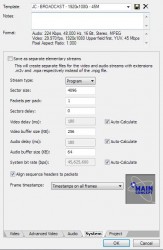 Hope this helps you. If you need a method for sending and receiving files to and from clients and tv stations or networks, check out this self-hosted file server I built called DistriFile!

The old post is below if you are still on version 10 like I was at the time.

However, I’ve been up to my ears with a TV show as it is now going National on a cable network and as the wonderful loving FCC requires, that’s right… closed captioning!  Didn’t have to do it locally because the station grosses less than $3M revenue per year.

I originally thought, “No problem, Vegas handles CC!”  WRONG! It does EVERYTHING EXCEPT actually embed the CC data into a MPG2 of which format I deliver EVERYTHING for broadcast with a special “recipe”.  Looks and sounds great.

I spent countless hours this past week in trials of uploading to the network to test this and that and it never worked.  The network can’t use the .scc files that Vegas creates wonderfully.

Due to some factors including turn around time for outside companies to do the CC work and getting the show to air, outsourcing is NOT an option PLUS even if  I outsourced the .scc creation with transcription, still can’t encode the CC data into the MPG!

HERE IS THE WORK AROUND! IT WILL SAVE YOU TIME, HAIR, AND MONEY!!!
Do all your CC work in Vegas (look in help file, but basically press “C” and it inserts the CC Command and you go from there…  then export.  It will create the file AND a .scc file with same prefix as exported file.  Take those files and open on a MAC with Compressor.  There is a button somewhere I think it is “User Data” or something (Can’t recall because I don’t have a MAC) but it is right there in the middle/lower area…  you simply point to that .scc file and then export from compressor your desired flavor of file…  BAM! It works!

Now, by the time I bought a MAC and software, I could buy the expensive programs that is required to do this but Vegas SHOULD do this because it handles everything else CC!!!  I saw on the Creative Cow forums that someone did this and is beta testing something from Sony to allow cc embeds in mpg.  Don’t know if it works, but its where I learned of this work around and thought I’d share because it is very frustrating indeed and and took a long time to find this solution and Sony Tech Support is not of any help because they won’t even respond to a support request.  I updated the “incident” a couple times and updated with this work around…  oh, there is a script floating around that is command line called cc_mux.exe but it takes like an hour per MB to work….. ummmmmm, no (maybe Sony can peek into that sourcecode to make this work???)