FacebookTwitterYouTubeVimeoInstagramLinkedIn
I despise vertical video, or do I?

Many years ago, I recall a gentleman coming into the studio saying, “Can you fix my wedding video? I’m tired of laying down to watch it.” I was perplexed. I looked at the video tape footage and low and behold, his friend that recorded the wedding actually turned the camera and shot it like shooting a portrait picture with a still camera to show them full body from head to toe because she couldn’t zoom out far enough. You could actually hear her saying “let’s get all of them” as she rotated the camera. UGH!

That was before smartphones. Now with smartphones in most people’s hands, they are naturally held vertical. Unfortunately, most people are too busy to rotate the phone horizontal to A) watch a video and B) to record a video. This started the vertical video syndrome. I’ve actually had people unfriend me on Facebook because I would post this video in their comments when they posted a vertical video. I have had some people ask me to “fix” their smartphone vertical video so they can watch it correctly on their TV. Well, you can, but because of the cropping and pretty bad quality to begin with, it ends up looking bad and is a waste of time.
There are MANY anti-vertical video messages out there but it seems most people simply don’t care. Adam Forgione made a very good one and I often send this to some friends instead of the longer puppet based one that I showed you earlier. It is very simple, to the point and still the message is ignored. Notice he says “turn your phone BEFORE you hit record.” This is because if you press record then turn your phone, you’ll end up with a really messed up image! 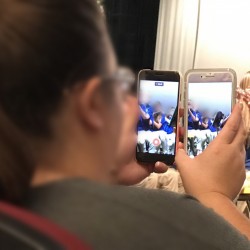 So what is worse than shooting a vertical video? Shooting two at the same time!

I thought I had seen it all, but when I was watching my daughter’s band performance–this happened. A lady was double-fisting phones to record two vertical videos at once! REALLY?!?! My first thought was maybe she was going to edit them together to get a wider picture, but as I saw the images they were of the same shot so my next thought was she was recording for her and someone else. She did keep panning left and right to get others that was sitting nearby, but all she had to do was hold the phone horizontal and wouldn’t have had to pan. A vertical video pan is VERY VERY jarring and can make one dizzy!

I want to stress the importance of recording video horizontally especially to parents documenting their children’s activities as they are growing up. One day down the road, you will more than likely want to put all that video on a device to watch on your television and you will be really upset that it won’t fill your screen. Trust me.

I certainly understand that everyone is not a photographer or videographer–let alone have any real technical knowledge of recording video. Smartphone manufacturers have put a lot of amazing technology into the hands of everyone that has one. Something I don’t understand is why the OS developers simply don’t make it to where video is recorded in landscape by default no matter how the phone is oriented. It could be done. Make people change a setting to intentionally record a vertical video IF he/she truly desires it.

Have I ever shot vertical video? Yes. There are only a couple of times that it can be beneficial to record vertical video in my opinion.

Recently, I’ve seen a few articles talking about the benefits of vertical video. Wait! Benefits? Really? I needed a good laugh one day so I read one. Then another, and another. I wasn’t laughing much.

The articles basically discussed how more and more people use their phones vs computers. I’m aware of that trend. What these articles mostly discussed was how filling up one’s screen will get and keep their attention because they are in vertical mode–all the time. It is natural to hold your phone vertical so that’s how people view most of their social media apps. These articles were also about mobile ads. I make mobile ads for some of my clients. It started to click. Let’s fill their screen with an attractive ad. That will get their attention more than a smaller horizontal image!

I decided to test this so I created a vertical video ad and ran it along with a standard 16×9 version of their commercial. The 4×5 vertical video ad is outperforming the 16×9 across the board–even on desktop! I’m not going to state numbers because I feel that is sensitive information, but it is a very significant amount difference of impressions, views, clicks, likes, shares, etc.

I chose to go with 4×5 vs 9×16 because it is more compatible with other destinations such as Instagram. Square 1×1 video works well too. In fact, if I had more text to place in the ad itself (before and after the video placement) I would probably choose to do the square one. Depending on the total ad content, I’ll either do 1×1 or 4×5 in the future. I may actually do both.

Am I saying to go start shooting vertical video? Absolutely not.

Do I despise vertical video? Not as much as I once did. It still makes me cringe when I see 99% of them in my social media feeds. Personally, I’d rather go full screen with the video and rotate my phone to see it normal. However, I am convinced that it is time to embrace the fact that vertical video is here, it isn’t going away, and it does have some advantages when utilized properly such as creating vertical video ads.