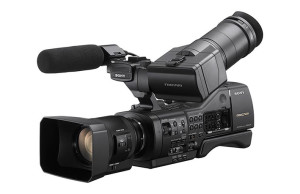 So I’ve been using my trusty ole Canon XH-A1’s and last year I purchased a Canon 60d DSLR to add a new look to some corporate videos.  I have tweaked the 60d with Magic Lantern and picture profiles, however its still limited.  I always said, “I’d LOVE it if I could have that 60d wrapped up in a traditional camcorder fashion.”

Now some people will disagree with me–and that is ok, but I prefer the larger camcorder form factor for various reasons:

Before I proceed, let me say this, “A camera is only a tool in one’s toolbox and is only as good as the operator knowing how to use it properly to obtain the results they and their clients want.”  There’s so many people with all their and their “fan camps'” opinions–and that’s ok!!! This camera has not gained much in popularity and has actually received a lot of criticism from the masses.  Whether its “Oh, it only has a APS-C sensor in it… my _______ DSLR kills that.” to something like “It has rolling shutter.” Ummm, ok, practically ALL CMOS sensors on the market is rolling shutter and not global shutter like CCD’s are.  Some cameras simply don’t show the effects of it as bad.  I HATE rolling shutter effects such as skew, but change your shooting style or learn how to compensate your shots and its not as huge as an issue.  By the way, I have found that 60p (60 frames per second) shows LESS skew than 24p, 30p or 60i.  I’ll show that sometime.

So I ended up researching A LOT on this camera, emailed a couple of users that were doing some good work with it and decided to purchase.  So far, I’m very happy with my purchase!  Is it a perfect camera? NO! Is it a camera for everyone? NO!  Is it ready to get out of the box and start filming? NO!  Do I like this camera? YES!!! Are there things I don’t like about this camera? Yes, but not deal killers.

If you care about getting the image right and such, I found I need to spend a lot of time learning it, familiarizing myself with it, and just film stuff and keep checking.  I love the fact I can pretty much alter the picture profiles how I want.  I wish I could change a few more things, but it doesn’t allow, but it’ll work.   The main thing is I can get DSLR “look” footage without the camera  looking so “DSLR-ish” and the it doesn’t physically look like a DSLR in any way!  I can’t wait to see how the large sensors will end up playing out in camcorders….

I’ll save the chatter for now, but here’s my “Day One” with the camera.  The YouTube clip (even at 1080) has some weird compression on it.  (I may try vimeo or another encoding recipe for YT soon.)

(View this in HD & full screen)

>>EDIT: I received a couple of emails basically saying “I can’t get my videos to look like this one.”  Ok, I’m sorry.  The first 5 minutes IS slightly color  corrected/tweaked/and has some noise reduction applied.  The LAST 5 minutes is straight out of the camera.  SO WATCH IT ALL!  Also, the paint brush doesn’t make one an artist…  I’m not a master at this camera by any means–yet.  Just saying.

If you’re interested in this camera, there are 3 nice resources to check out: Vimeo User Group, DVInfo Forums and the Sony NEX-EA50 User Blog.