FacebookTwitterYouTubeVimeoInstagramLinkedIn
How I share files with clients and TV Stations

Just a few years ago, to get a commercial to a TV station, I would have to make copies on tape and deliver the tapes to the stations. Some wanted *cough* a DVD. Thankfully, with progression of technology, all can now accept a digital file uploaded to their servers primarily via FTP. Before the commercial would be approved by the client, they would have to preview and approve the video.  Depending on their operating system and their email restrictions, I’d have to send a multitude of preview file .mp4, .wmv or whatever we found that their computer could play–and get to them.

Even with digital file delivery, there are headaches involved!

Typically for a given client, I need to send the commercials to five or so TV stations. Each representative of course needs to know when the spot was uploaded, the file name, etc. If we are on a time crunch to get on air for the next day, they want to know when it is being uploaded, how much longer, etc. So, I would have to be physically sitting in front of the computer monitoring each FTP upload. I didn’t like this because sometimes I would need to go out and film something for another client or something.

Let’s not forget about trying to email the preview files to the clients as I already mentioned! For some that couldn’t even receive a video attachment due to their IT department’s security policies, I would have to either upload it to vimeo or youtube, unlist it and let them view that way. Yeah, that works, but when getting into multiple versions and such, it just gets too cluttered and too many places to do things. Oh yeah, some clients couldn’t even access vimeo or youtube due to IT restrictions.

So how to share video files with all of these people?

I explored several options for sharing files. Some were online services such as Dropbox, and others were self-hosted solutions that I could run on a server in my office such as OwnCloud, Pydio, Projectsend, and more. The online services had great user interfaces and seemed good, but those very large files I’d sometimes have to deal with were excruciating waiting to upload and download. I needed something to eliminate the time for transfers from the cloud. The self hosted methods eliminated that. If I was waiting on a 4 GB file from someone, they could just upload to my network and I could copy to an edit station within seconds instead of an hour or more. The problem I ended up finding was sending the final videos to the TV stations and networks. I was able to share those files to the station reps, but they didn’t have time to download them… the policies for most of the stations was for someone to upload to their FTP servers. Ugh.

I got tired of limitations, so I built my own file server. 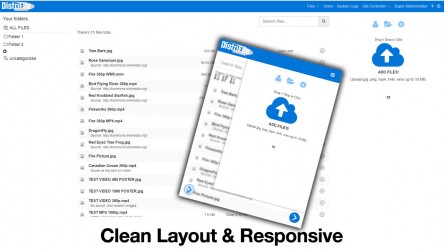 Being proficient with technology and having built some websites in the past, I figured that I could take the time I spent on testing all the different paid and open source solutions and build my own system.

[Cue the dramatic music]. Ta-da! I was on to something. I managed to build a PHP application that I could upload files and share to users (my clients) for previewing the files and then added more users for the station representatives. EVERYTHING was handled through a web browser. No plugins for anyone to download. I could have people upload files directly to me and then I could share a file of any size to anyone I wanted! I even added a routine/function to FTP the final broadcast files straight to a rep’s FTP server!That was working great! I ended up getting fancy with it… when a file was starting to upload to a station, I was able to build a FTP upload status checker. The system would send an email to the rep and anyone else within the station such as the traffic department, master control, whomever! They would know the file was being uploaded and could click a link to see the speed its uploading, what the ETA would be, and as a result, I didn’t have to be in front of my computer watching each and every upload.

A new self hosted file server application was born!

Several of my clients as well as some of the station reps were loving this and suggested that I sell it. It didn’t even have a name. I thought about it for a while, so I called this file sharing server “DistriFile” which is two words combined “Distribute File” as that is what it does, distributes files.

Whether I need to share a file to a single user, group(s) of users or even the public with a password, sharing a file is now so simple and easy. I even have my kids setup and we can easily share videos and pictures from our phones with one another.

Uploading files is very easy, here’s a video I made to show you:

One thing I had to do to open it up for sale was allow people to customize their file server how they wish, so now with version 3.x, there are many ways to customize DistriFile. Check out this video:

How YOU can have your own file sharing server! 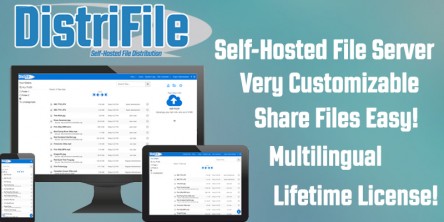 It’s not difficult to have your own DistriFile Server. Simply make use of a decent PC that you don’t use anymore. Wipe it and install a Linux 64bit OS such as Ubuntu Server on it. There are many guides on the net. Setup a domain name to point to your network. Setup your router to send port 80 or 443 (for SSL HTTPS) to the IP address of the server you just setup. You can even install this on a shared host or even a VPS account such as DigitalOcean if you don’t want to run your own local server, but one benefit is eliminating “the cloud” when you need to send and receive large files.

Once your server is setup, purchase DistriFile. Follow the instructions and you will be setup within minutes with your own powerful self hosted file sharing server!

A demo of DistriFile-PRO is available. Check it out, browse around and let me know in the comments here what you think.