The Lock n’ Go series of Americana Grills are made in the USA, and actually about an hour’s drive from here. This project was a collaboration with Heath Guinn for whom I have worked several projects with/for over the years. The tasks at hand was to create a video (of each color) of each grill, as well as 360° photos on a white background so that when viewed on a product page, the grills would then spin when the user moved the mouse. We had a nice voiceover in one of the previews, but it was requested to be more upbeat. While I was messaging an old friend of mine, Joe Tillman the request to look for a more upbeat voiceover came in. I remembered him wanting to get into some VO work way back when, so I had him demo the script. It was approved! Funny how that happened. 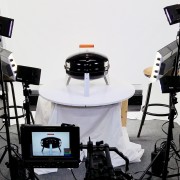 The videos were done and then it was time to do the 360° photos. Snap some photos on a white background and edit. Simple enough, right??? Yeah… to make the photos, I ended up taking a picture every 15° making a full rotation. Repeat for each of the three views. This was my first time doing this, so I made several experiments and finally found a setup that worked well in the Sync.Space studio and then it was time to edit EACH photo and pretty much cut out the white background from the grill and placed it on a solid white layer. That was VERY time consuming, so with the assistance of one of my DistriFile customers, “Nodsi” who is a photo editor, we knocked these out. The end result is pretty slick! Simply move your mouse/swipe left and right to watch it spin!

Now, I will say that the 360° product photography was much more than I anticipated. Let me just say that they ended up getting a HUGE deal on this project all together. Its not something I want to get into, but having done it. I can. If the price is right 😉